The population of medieval Armenia was not homogeneous. Some combinations of craniological features of South-European race are extant. According to the craniological data on our disposal today, among the late medieval population of Hovhannavank are present specific complexes of features not characteristic for the Armenian population of later periods. This complex of features stands close to the Caucasioni type. Closest analogues to that type were found among the population of Georgia, Azerbaijan (Mingechaur) and Iran (Turang Tepe). Basing on anthropological and paleopathological data, two types of deformation were observed: circular high (high ring) and low. Pathological changes represent a certain adaptation form to ecobiological and social environmental factors. The leading among the unfavorable environmental factors is general infectious background.

Starting from April, 1915, the deportation and massacre organized by the Ottoman Empire had embraced, in a few months, almost all Western Armenia, Cilicia and the Armenian-inhabited localities of the Ottoman Empire.
In some localities Armenians organized self-defense battles. Although the Turkish tyranny cruelly suppressed the heroic resistance and the self-defensive battles started in various localities, nevertheless the devoted Armenian heroes, who fought for their elementary human rights and for the physical survival of their nation, recorded brilliant pages in the history of the national liberation struggle and their heroic characters inspire the Armenian people till today.

By: Qosyan Lilit Institute of History of NAS RA

The present article is dedicated to the collection "Brotherly Aid to the Armenian Victims in Turkey", published by the efforts of the famous Armenian intellectual, historian, publicist, and public figure Grigor Janshyan, and pro-Armenian Russian intellectuals V. Golstrem, A. N. Sazanov, A. N. Greny, with the financial assistance and active participation of Nikolsky and others, aimed at providing material and moral assistance to the thousands of orphaned Armenian refugees who survived the Hamidian massacres. The collection was of great interest to the general public, which prompted the editorial board to publish a new edition. The second issue of the collection was published in 1898 in Moscow, which was more elaborate and enriched with interesting new materials. It was well received by both the Russian and Armenian societies. As a result, 12 valuable orphanages were opened for Armenian orphans thanks to the publication of this valuable collection. Invaluable is Gr. Janshyan՛s charity for the Armenian people.

AN EPISODE FROM THE HISTORY OF THE ARMENIAN CHURCH

The conflict between the two Catholicoses Davit and Daniel started due to their desire to ascend to the throne of the Catholicosate which lasted about 6 years (1891-1897). The underlying issues of the conflict were conditioned by such factors as the self-interest of different members in the ecclesiastic elite, their interpersonal and in-group discords. The rivaling Russian and Persian diplomatic circles, wanting to keep their influence on the Catholicosate, fuelled the ongoing discords. Moreover, the Ottoman government pursued an indirect policy toward the conflict which was reflected in the fact that during that period the Patriarch GrigorKhamsetsi succeeded the CatholicosHovhannes after his forced resignation. At the same time, the given circumstance showed that the elite of the Armenian community in Constantinople had changing attitudes towards the two Catholicoses Davit and Daniel in terms of their recognition.
The existing controversy between the groups, supporting either Catholicos Davit or Daniel is also obvious. This controversy had a negative impact on the Armenian communities in both Constantinople and Smyrna. It disrupted the communities’ normal life, leading to unnecessary disputes among the population.

The article deals with the first legislative activities conducted by the Transcaucasian Seim in February – March, 1918. Main topics of the sessions were the law of elections, composition of the Seim, the attitude towards Bolshevik Russia, peace treaty with Turkey, territorial-national division of Transcaucasia etc. Georgian Mensheviks and the Muslim party of Musavat had joined their efforts in seceding from Russia, while the Armenian Revolutionary Dashaktsutyun (ARF) actually was left isolated and saw itself in the political camp of mostly Russian socialist and state-oriented SR-s and Cadets, in this aspect giving up party principles in favor of national interests. If the tactics of Georgian Mensheviks and Musavatists was mostly aggressive, ARF held cautious, wait-and-see attitude which basically is connected with the Turkish invasion and defenseless Western Armenia.

AZERBAIJAN: THE HISTORY OF A DISEASE OR EXTERNAL FACTORS OF THE FORMATION OF GENOCIDAL POLITICAL CULTURE OF TRANSCAUCASIAN TURKS (Multidimensionality of the problem)

By: Alexander Manasyan Corresponding member of NAS RA, Head of the Chair of Theoretical Philosophy and Logics, YSU

In the article is discussed the policy of intolerance towards Armenians which started with establishment of the Democratic Republic of Azerbaijan (1918-1920), later to be transformed into genocidal consciousness through further spiritual-political mutation.Stalin՛s project of the building of new Azerbaijani nationin practice was transformed into the project of ultimate formation of a new Turkificized state and society - bearer of sophisticated forms of genocidal policy and behavior.

Extracted from “THE TREATMENT OF ARMENIANS IN THE OTTOMAN EMPIRE (1915-16)” (DOCUMENTS PRESENTED TO VISCOUNT GREY OF FALLODON, SECRETARY OF STATE FOR FOREIGN AFFAIRS by Viscount Bryce, with a preface by Viscount Bryce), London, 1916, VII. VILAYET OF MAMOURET-UL-AZIZ

Foreign Sources and Authors About Armenia and Armenians2

HARUTYUN MARTIROSYAN: THE CITADEL OF THE CITY OF TEISHEBAINI AND CULTURAL RELATIONS WITH LOCAL TRIBES

HENRIK ABRAHAMYAN, SOCIAL AND POLITICAL PREREQUISITES FOR THE DECLARATION OF INDEPENDENCE OF THE REPUBLIC OF ARMENIA AND THE BEGINNING OF ITS FORMATION (February 1956 – September 1991). – Yerevan, 2020.

The monograph of H. Abrahamyan is devoted to the study of social-political life of the Republic of Armenia from 1950s until early 1990s, and the history of the process of independence. The study under review has theoretical, practical, and political significance not only from the point of view of the elucidation of problems discussed in the book but also for evaluation of Armenia’s achievements in order to avoid possible mistakes, to be able to predict future tendencies, and productive guiding of the social governance.

THE ROYAL AND PRINCELY HOUSES OF PROPER ALBANIA AND EASTERN REGIONS OF ARMENIA FROM ANTIQUITY TO THE 13TH CENTURY (HISTORICAL AND SOURCE STUDY EXAMINATION), Yerevan, 2020 By Alexan Hakobyan 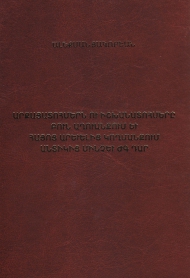 The monograph of A. Hakobyan is an attempt to study the royal and princely houses of Proper Albania and Eastern regions of Armenia from antiquity to the 13th century.

Proper Albanian Lezgian-speaking tribes (according to Strabo - 26 of them) who live on the left bank of the River Kura created a united kingdom only at the very beginning of the 1st century BC. Apparently, its governing family line was actually ethnically Albanian.

The eastern, coastal half of the Albanian kingdom had been separated from it in the first half of the 3rd century AD where the kingdoms of Masquts, Balasakan, etc. came into existence. Thereafter, the sources stop calling the inhabitants of these areas as “Albanians”, which leads the author to the conclusion that the process of consolidation of proper Albanian tribes in a single kingdom was not yet completed and the term “Albanians” continued to be a collective name, describing only meta-ethnic community, which united the entire population of this administrative-territorial unit as an exonym.

THE POLICY OF TURKEY TOWARDS ARMENIA DURING THE GOVERNING PERIOD OF THE JUSTICE AND DEVELOPMENT PARTY (2002-2012), Yerevan, 2020 By R. Safrastyan, V. Ter-Matevosyan, T. Manukyan, A. Hovhannisyan 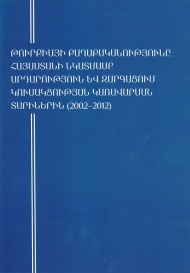 In the collective monograph are discussed new trends in the geopolitical thought of modern Turkish republic, peculiarities of the foreign policy of the “Justice and Development Party”, the periods of the policy of Turkey towards the Republic of Armenia during 2002-2010.

In this context also are highlighted the manifestations of the «Armenian» policy of the “Justice and Development Party”, the process of signing the Armenian-Turkish protocols in Zürich and their results.

ADMINISTRATIVE-DEMOGRAPHIC PICTURE OF THE YEREVAN PROVINCE, CRAFTS AND TRADE, Yerevan, 2020, By Hamlet M.Harutyunyan 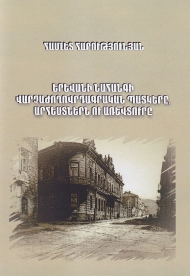 H.Harutyunyan’s monograph is devoted to the demographic problems of the Yerevan province from its establishment after the conquest of Eastern Armenia by Russia in 1827 until 1917. Chapter I discusses the problem of administrative division of the province, Chapter II deals with the population, and Chapter III that of crafts, industry, and trade. 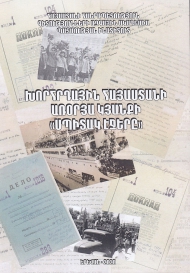 In the articles included in the collection are discussed different aspects of Armenia’s 1940-60s everyday life which until present mostly remain unknown to public. The studies are based on archival materials, published and unpublished memoirs, documental films and other types of information.

THE COUNTRIES AND PEOPLES OF THE NEAR AND MIDDLE EAST, vol.XXXIII, part 1, Yerevan, 2020 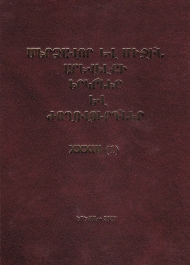 The current issue includes articles dealing with different aspects of the ancient, medieval, and modern history, philology, and source studies. 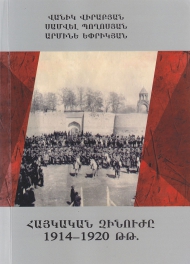 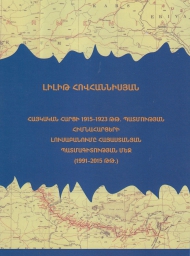 The monograph of L.Hovhannisyan is a critical study of modern Armenian historiography in regard to the history and results of international diplomatic negotiations on the Armenian question.

In the history of linguistics, the beginning of the 19th century was marked by the foundation of historical-comparative linguistics. From the very beginning of the foundation of this method, the origin and kinship of the Armenian language has been the focus of linguists’ attention. German scientists have made a great contribution to this field, especially at its beginning. Heinrich Hübschmann holds a special place among them.
Hübschmann was born on July 1, 1848 in Erfurt. He studied Oriental philology at Jena, Tübingen, Leipzig, and Münich, in 1876 he became professor of Iranian languages at Leipzig, and in 1877 professor of comparative philology at Strasbourg.

Gagik Sargsyan was a prominent Armenologist and expert in ancient Near Eastern civilizations whose studies became benchmark for evaluation of ancient Armenian history, especially its early periods including Hellenistic period.
G. Sargsyan was born in 1926 in Yerevan. In 1943 he entered the Historical Faculty of Leningrad University. In 1951-1954 he as a postgraduate student studied in the branch of the Institute of History (Leningrad) of the Academy of Sciences of USSR, under the supervision of leading Soviet orientalists – I.Diakonoff, V.Struve, I.Meshshaninov and others. In 1954 he was awarded the degree of Candidate of Historical Sciences (“The city of ancient Armenia”).