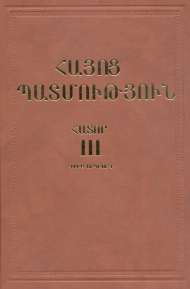 It is the Second Book of the Third volume of the Academy many-volumed set “The History of Armenia” which includes the last stage (1901-1918) of the new history of Armenia, the period of complex and turbulent events.
The volume is devoted to the elucidation of social-economic problems (of the beginning of the 20th century), national and social movements in Armenia, as well as the activities of the Armenian volunteer units during the World War I. The Armenian Genocide and the problem of the Armenians' Patricide (deprivation of the Fatherland) is studied newly. A special attention is paid as to the political events in Armenia after the 1917 Revolutions in Russia, as well as to the May Heroic battles of 1918 which resulted in realization of the Armenian peoples' aspirations to recreate the Armenian state: on May 28, 1918 the independent Republic of Armenia was established. The questions of development of the Armenian periodical press, pages relating to the Armenian Diaspora, as well as the rise of the Armenian cultural life in the second half of the 19th century and the beginning of the 20th century are also presented in the volume.