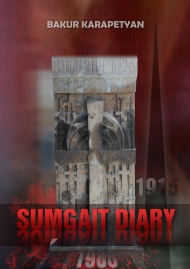 The book is dedicated to the memory of the victims of the genocide of the Armenians in Sumgait which was organized and executed on Soviet Azerbaijani high governmental level from February 27-29, 1988. A month later the author of the book, Armenian writer and publicist Bakur Karapetyan personally visited Sumgait (from March 27-April 5), shot videos of the sites of atrocities, held meetings and interviews with various representatives of the Azerbaijani authorities guilty for the crime against humanity. He met and interviewed also  local Armenians and other nationalities who suffered during the inhuman acts of the Azerbaijani slaughterers. The book is based on documentary facts which cast a light upon the reality.