FORMATION OF THE ARMED FORCES IN THE THIRD REPUBLIC OF ARMENIA 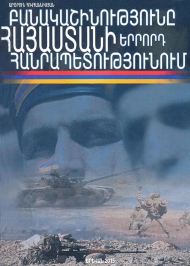 The research is the first step to discuss the process of the formation of the Armenian armed forces in the early 1990, which ran parallel with military actions, in desperate economic conditions and under the blockade, and in general during the formation of the new Armenian statehood, as well. In addition, whole process of the military actions, the different battles and operations, and also the Armenian military culture and the ways of thinking are presented. In the separate chapters of scientific research the stages of development of the army and main post- Ceasefire processes are studied - in short, the way from a so-called fighting groups to an organized armed forces and the process of armed forces transition to an army of new era. This is a difficult period for the Armenian people, which was hardly overcome, but it was an opportunity for the Armenian people to win the war. The research consists of three chapters.