A CLUSTER OF BIRD CHERRIES 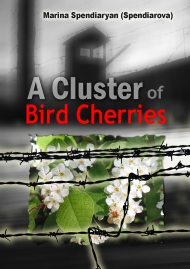 The daughter of the great Armenian composer, Alexander Afanasyevich Spendiaryan (Spendiarov) (1871-1928), Marina Alexandrovna (1903-1982) was sentenced in 1940 according to the 58th article the Criminal Code of the USSR for an attempted assassination of Stalin. In 1926 she taught English to Stalin’s son, Vasili, for two weeks. For the people who do not know the orders of the Beria NKVD it will be strange to learn that she was not shot, while people who had committed lesser ‘crimes’ were executed. Trying to surmise from logical reasoning the absurdity of the whole thing is obvious. It seems that all attempts to find the reasons for such decisions and any other decisions of the NKVD organisation is as senseless as the search for a logical explanation of the imprisonment of millions of innocent people.

A Cluster of Bird Cherries also has an informative value. First of all Marina’s observations regarding the everyday life of Stalin’s family, the principles of bringing up Vasili, his son and the spiritual state of Nadezhda Alilueva, his wife. Marina was in the terrible camps in Taishet (Ozerlag) and Ukhtizhemlage. There are many names mentioned in the book who passed by on that road and perhaps this publication will help their relatives and friends to learn something about their fate – this is the general, humanistic value of such publications.