By: Zakaryan A. H., Doctor of Sciences (Philology) 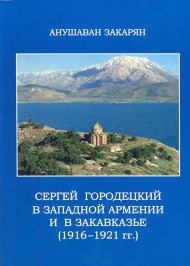 Among the representatives of Russian social-political, military, literary - cultural figures having displayed active work in Western Armenia and Transcaucasia during World War I and the following years, prominent poet, writer, publicist, translator and public figure Sergey M. Gorodetsky (1884 ֊ 1967) deserves particular attention. At the beginning of April 1916 the Russian poet was sent to Caucasian front as a figure of All - Russian Union of cities and a correspondent to “Russkoye Slovo”. On April 10- 12 in the Tiflis department of the Union of cities he was appointed to work in Van. Just at that time Gorodetsky happened to get acquainted with famous Armenian poet Hovhannes Toumanyan. Acquaintance and growing intimacy with him predetermined the direction of his activities in Western Armenia. On April 20 Gorodetsky went to Van as a representative of the Union of cities from Atrpatakan region and displayed vigorous activities rescuing orphans. On the 22nd of September he again went to Van and till November of the same year took the place of the representative of the Union of cities there. The poet organized food - supply to population, medical assistance of refugees, saved from death and starvation hundreds of children, opened refuges. By all his activities S. Gorodetsky left a good name of a true friend of Armenians in grateful memories of generations in hard times for them.