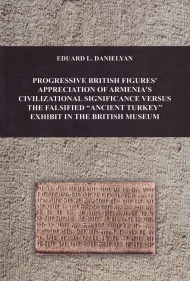 The book presents a cultural-spiritual perception of Armenia as the country of the Paradise, Noah’s Ark on Mt. Ararat-Masis and the cradle of civilization by famous British figures. Special attention is paid in the book to the fact that modern British enlightened figures call the UK government to recognize the Armenian Genocide, but this question has been politicized and subjected to the interests of the UK-Turkey relations. Thus it is pushed into genocide denial deadlock, despite the fact that the Parliament of Wales recognized the Armenian Genocide and erected the monument in commemoration of 1,5 million innocent Armenian victims of the Armenian Genocide.
The fact of exhibiting of the archaeological artifacts from ancient sites of the Armenian Highland and Asia Minor in the British Museum’s “Room 54” (wrongly named “Ancient Turkey”) in line with Turkish falsifications of history and historical geography was an example of how the genocide denial policy of Turkey polluted the Britain’s historical-cultural treasury and distorted rational minds and inquisitiveness of many visitors from different countries of the world. Two months after publication of this book, in July 2013 “Ancient Turkey” was renamed into “Anatolia and Urartu”. Despite some changes, historical geography and interpretation of material culture concerning western part of the Armenian Highland again are misrepresented.
There are collections of ancient valuable artifacts and pieces of art from Armenia (Western and Eastern Armenia) and Asia Minor (the Hittite, Greek, Pontic, Cappadocian etc.) in the British Museum, as well as historiographical and cartographic materials on the history of Armenia and Asia Minor in the British Library, as well. Taking into consideration that all these are vivid testimony of the contribution of the Armenian and Asia Minor peoples to ancient civilizational heritage of the world, it is necessary to rename “Anatolia and Urartu” into Ancient Armenia and Ancient Asia Minor.