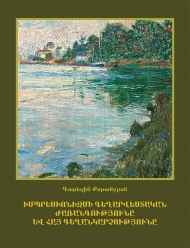 The book is dedicated to a paramount problem of the Newest Time of Armenian visual arts,
that is, to the role of Impressionism in its formation and development. After several centuries of stagnation, Armenian Fine Arts joined a new phase of its history, which laid the foundation for its revival in the second half of XIX century. At the end of the same century a galaxy of outstanding masters came forward, who were educated in Europe and Russia and had successfully assimilated the pictorial and graphical system of the modern Western Art. The formation of creative art of this generation of Armenian masters coincided with the time when French Impressionism was spreading in European countries. The main achievements of Impressionism due to which European pictorial tradition was renewed, as it is well-known, were the enlightenment and activation of the color palette, spontaneity of the artistic accomplishment, freedom of compositional mastering, boldness of artistic ideas realization and the most significant - the turn to plein-air, in other words, out of door painting with all ensuing consequences.