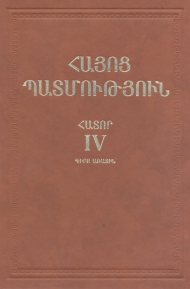 In the first book of the fourth volume of the four-volume academic “The History of Armenia” is presented the modern history of Armenia. It includes the periods of the declaration (due to the victorious May battles of 1918) of independent First Republic of Armenia (1918-1920) (internal and external conditions (political, economic, cultural, educational, diplomatic, military) of its development and difficulties), the Second Republic or Soviet Armenia (the end of November 1920- September 1991) (the formation of the centralized command-based, totalitarian system in the USSR, forced collectivization and industrialization, and the political repressions in the 1930s, when many Armenias also fell victim of political repressions), the Great Patriotic War (1941-1945). The Armenians were also a very active participant of the war both in the front and in the rear. By several criteria Armenians were in the first ranks among the USSR peoples by the number of marshals, generals, heroes of the victorious Soviet Union and those awarded, and other aspects.