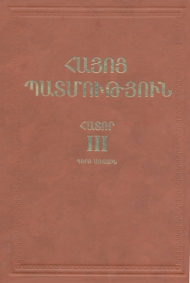 The first book of the third volume of the four-volume academic “The History of Armenia” includes the period of the new history: from the second half of the 17th century to the end of the 19th century. It covers issues such as the Armenian liberation movements and programs, the joining of Eastern Armenia to the Russian Empire, the internationalization of the Armenian Question, the formation of liberation groups and parties, the Armenian massacres of 1890s, self-defense struggle of Armenian, social-economic issues and issues of the cultural history of that period, etc.