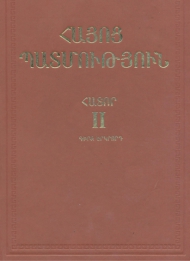 The second book of the second volume of the four-volume academic “The History of Armenia” includes the period of the Middle Ages: from the middle of the 9th century to the mid of the 17th century. It covers issues such as the reign of the Bagratuni dynasty, the period of flourishing of Armenian architecture, arts, education (particularly high schools of Ani, Gladzor and Tatev Universities, etc.), the expansionist policy of the Byzantine Empire towards Armenia, Turkish-Seljuq and then Tatar-Mongol devastating invasions and rule, the Armenian Zakarian princedom and other Armenian principalities, the Armenian princedom and kingdom of Cilicia, the liberation movement of XVI-XVII centuries, Armenian communities, social-economic issues and issues of the cultural history of that period, etc.