By: Melkonyan A. A., Academician of NAS RA 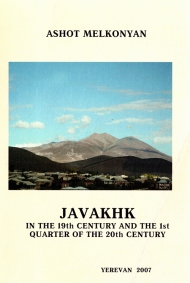 Javakhk was originally one of the nine districts of Gugark province of the Kingdom of Great Armenia. It is mentioned by the name of Zabakha in Araratian (Urartian) King Argishti’s (786-764 BC) inscriptions. Later it was within the Ervanduni (Orontid), then Artashesian and Arshakuni and Bagratuni Kingdoms of Great Armenia. It is mentioned as the family estate of the Vardzavuny princely family. Since time immemorial Javakhk has been inhabited by the Armenians, which is attested to by various Armenian, Georgian, Arab and other sources. According to Georgian historian Leonti Mroveli, early in the 4th century, when St. Nune was preaching Christianity in Javakhk, the local population’s vernacular was Armenian.

Meeting Akhalkalak Armenians’ desire to be reunited with their Homeland, the authorities of Soviet Armenia (Alexander Bekzadian, Alexander Myasnikian, Arshak Mravian, and others) demanded to return the district and Tzalka to Armenia. In July 1921 the Georgian and Azerbaijani Bolsheviks achieved the annexation of both Akhalkalak and some other Armenian territories to Soviet Georgia and Soviet Azerbaijan. Under the Soviet rule, the region was completely ignored by the Georgian authorities. The attempts to introduce any changes in the frontier became highly dangerous; those Armenians who raised that question received jail terms or were sent into exile in the 1930s. After Georgia declared independence harsh socio-economic and political conditions are endangering the life of the native Armenians of Javakhk. It is of the utmost importance to study the problem of Javakhk on an objective scientific basis, to realize the political reality, and to resolve the problem in a fair, just and civilized manner.