THE ARMENIAN GENOCIDE: THE YOUNG TURKS BEFORE THE JUDGMENT OF HISTORY (an extract from the book) 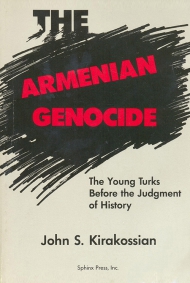 The book uncovers the political essence of the Young Turks and reveals the historical truths about the tragedy that befell the Armenians in the Ottoman Empire. The murder and deportation of Armenians in 1915 and following years provoked the censure of the world. Through a comparative analysis of an enormous quantity of multilingual and diverse sources and a thorough study of newly unearthed sources, the author showed how contemporary Turkish historians were acting as attorneys covering up the monstrous crimes of Sultan Abdul-Hamid II and the Young Turks. On June 2 and 3, 1921, the district court of Berlin tried Soghomon Tehlirian, Talaat’s assassin. In a speech to the court Tehlirian said that Talaat was sentenced to death in absentia by the court martial in Constantinople. Talaat’s assassination committed by Tehlirian was justified by German court as an act of vengeance.

The Turkish policy of the genocide against Armenians was aimed at their physical destruction and realization of the goals of pan-Turkism. The apex of the Young Turks' many atrocities was the extirpation during World War I of one and half million Armenians in their Homeland – Western Armenia, a crime against humanity and civilization that became known as the Armenian Genocide.