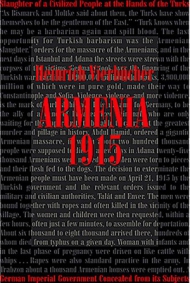 In his book “What Did The Imperial Government Hide From German Subjects: Armenia 1915: The Annihilation of the Civilized Nation by Turks” , published in 1922 and republished with additions in 1930 under the title “Armenia - 1915” , Vierbücher depicted in detail all the pain and wrath he felt during the mass extermination of Armenians in Constantinople, Mesopotamia, Aleppo and Damask, the heinous crimes committed by Turks and the ghastly indifference of their allies, German senior instructors cooperating with them.
In his book Vierbücher condemns the 1915 Armenian Genocide with wrath and shows the reader with vivid historical facts that the Ottoman Empire itself was based on blood and carnage from the beginning. After World War I Heinrich Vierbücher actively participated in the pacifist movement dedicating to it his indisputable rhetorical endowment and the bitter experience of a person who had witnessed war and violent massacres. In 1930 thanks to the publication of Vierbücher's new book “Armenia 1915” condemned slaughter of Armenians the crime was voiced again, but unfortunately in 1933, after the German Nazis came to power the book was prohibited and mainly burnt. Even the libraries of private citizens were being inspected in search of that book.
For his long-lasting pacifist and anti-fascist activity and public speeches Vierbücher fell victim to the Gestapo violence.