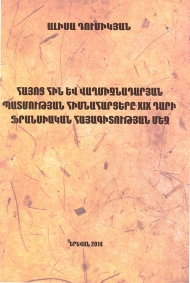 Summary
The book is dedicated to the analysis of the coverage of issues in the history of ancient and early medieval Armenia in French Armenology of the 19th century. Special attention is paid to the evaluation of the Armenian historiographical heritage in the French Armenological studies by J. Saint-Martin, J. Oppert, M. Brosset, V. Langlois, E. Dulaurier and others. Many of them followed the traditions of Armenian studies carried out since the 18th century in the Mekhitarist Congregation in Venice.The elucidation of the issues in the ancient and medieval history and historical geography, as well as the spiritual and civilizational values of Armenia on the basis of historical sources was at the centre of the 19th century French Armenological studies. French Armenologists made an important contribution to the Armenian historiography.