RUBEN SAFRASTYAN. OTTOMAN EMPIRE: THE GENESIS OF THE PROGRAM OF GENOCIDE (1876-1920) 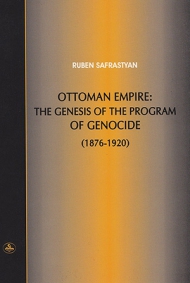 Ruben Safrastyan’s monograph is an essential research work in the studies of the genocidal nature of the Ottoman Empire, particularly, the Hamidian, the Young Turk and the Kemalist programs of genocide against the Armenian people and the criticism of the Turkish official historiography, which following the genocide denial policy of the Turkish government falsifies the history of the Armenian Genocide. The opening sentence of the book states: “Genocide is not only a historical phenomenon or a scientific abstraction, but a severe reality of our days, a gravest crime against humanity... the Ottoman Empire was the first state in the history of mankind to prepare and perpetrate a large-scale genocide” (p. 7). Armenian and foreign researchers have published many monographs and research articles on the Armenian Genocide. Alongside with their works the author widely used collections of archival documents published in different countries.