THE DESTRUCTION OF ARMENIANS IN CILICIA, APRIL 1909 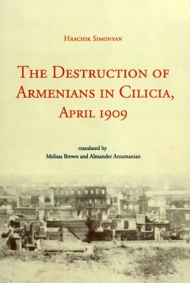 While writing this history of the 1909 massacres of Cilician Armenians, the author used archive documents, available literary sources, and the print media of the time. The majority of the literary sources on the calamity of Cilician Armenians are memoirs published, with very few exceptions, in the year of the massacres (1909) or during the two or three years that followed (1910-1912). A great volume of material about the 1909 massacres of Cilician Armenians and their consequences was provided by the Armenian press of the time, the pages of which are filled with harrowing descriptions. The events were covered on a daily basis by Piuzantion (the official organ of the Armenian Patriarchate), Arevelk, Zhamanak of Constantinople, the Armenian newspapers and periodicals of Smyrna (Izmir), Karin (Erzrum), Trapezunt, and other cities of the Ottoman Empire and Western Armenia, and almost all organs of the Russian Armenian press (Mshak, Horizon. Kovkasi Lraber, Surhandak and others). Numerous articles were published in the pages of the Russian, European, and American press of the time.