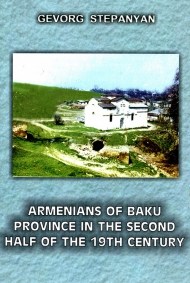 As attested by the available archive documents, as well as historiographical and lapidary sources, from times of remote antiquity Armenians - the natives of the Armenian Highland inhabited also the region of Eastern Transcaucasia, namely from the river Kur (the left bank) to Apsheron Peninsula. Armenians created their specific cultural heritage there and participated in the social-economic, educational and cultural life of the region.

With the invasion of Turkic-speaking elements into Eastern Transcaucasia (from the end of the 11th c. and later) the ethno-cultural makeup of the region suffered grave damages and underwent destructive transformations. Despite this, the Armenians due to their creative abilities and natural self-defence characteristics succeeded in continuing their existence and constituted a considerable part of the region’s population. Eastern part of Great Armenia’s province of Paytakaran was also included into Baku Province of the Russian Empire in 1867.
The Armenians of Baku Province suffered a particularly heavy losses in September 1918, when the Turkish army units invaded Transcaucasia and reached Baku. The criminal policy of physical extermination and deportation continued against the Armenians throughout the existence of Musavatist “Azerbaijan”. The policy of the violation of the rights of the Armenians and other native peoples in Eastern Transcaucasia (Tats, Talyshes, Lezghins, etc.) continued during the 70 years of the rule of AzSSR. Genocidal crimes were perpetrated against the Armenians of the city of Sumgait (27-29 February, 1988) and Baku (13-19 January, 1990) by the Azerbaijani authorities.