MANUSCRIPT HERITAGE OF ARTSAKH AND UTIK 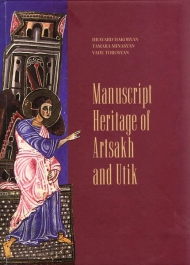 The new publication is dedicated to the history and manuscript heritage of the two historical provinces of Armenia. The first chapter of the book provides brief review of the history of Artsakh and Utik from ancient times to the 19th century. The second chapter gives detailed information on the scriptoria of Artsakh and Utik which functioned adjacent to almost all large monasteries. Manuscripts produced from the 13th to the 18th centuries have come down to us. The large part of the survived manuscripts is kept at the MesropMashtots Institute of Manuscripts (Matenadaran), and the others are stored in different libraries and depositories around the world, as well as in private collections. The third chapter of the book is dedicated to the miniature painting of these manuscripts, giving a general idea on the miniature school and artistic traditions of Artsakh and its neighboring provinces. More than hundred images of the illuminated manuscripts are included in the book-album, aimed at propagating the rich and, at the same time, little known written culture of Artsakh and Utik.