SYRIAN ARMENIANS AND THE TURKISH FACTOR. Kessab, Aleppo and Deir ez-Zor in the Syrian War 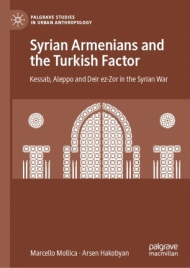 The Syrian War represents one of the most important challenges the world has faced in the last years. The trajectories of its spill-overs and migrations have destabilized neighbouring countries and political relations between Middle Eastern and European countries and World Powers. This book provides a different reading of contemporary events in Syria and their roots, by reading them through the eyes of the Syrian Armenian community. It was however the involvement of the Turkish Forces in the conflict that played a major role in Syrian Armenians’ formation of war narratives. This interconnected identity, migration and war. The conflict allowed urban transformations in war actors’ attitudes towards Syrian Armenians and their past, above all the Armenian Genocide. The book will shed light on the war-related social urban changes in Kessab, Aleppo and Deir ez-Zor.