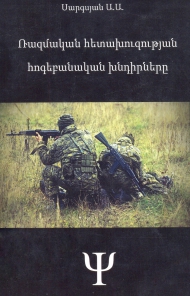 Alexander Sargsyan, a participant in the Artsakh Liberation War and an awarded police colonel, authored the textbook ՛՛Psychological Problems of Military Intelligence.՛՛

The booklet is valuable as the author participated in the Artsakh war and his research is based on his and his comrade-in-arms՛ military experience. In July 1992, when the Azerbaijan armed units and the Soviet former military launched a large-scale attack, A. Sargsyan and his squad were surrounded, and willingly or unwillingly he was forced to do disruptive-reconnaissance operations in the enemy՛s rear. It must be stated that nowadays little research is available that combines theoretical and practical knowledge.