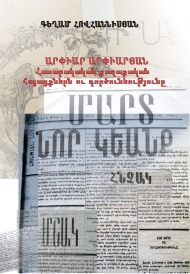 In the series of books “Arch. Mesrob Ashjian” the Institute of History of NAS RA has published the research work “Arpiar Arpiaryan: Socio-political Views And Activities” by G. Hovhannisyan, which is dedicated to the life and activity of Arpiar Arpiaryan (1851-1908), a publicist, a prominent figure of the Armenian liberation movement in the late 19th and early 20th centuries. He was one of thօse brilliant figures of Armenian intelligentsia, who had a profound impact not only on literary, but also on social and political spheres. A. Arpiaryan belonged to the generation of prominent figures of the time like Kh. Abovyan, M. Nalbandyan, Raffi, M. Khrimyan and others who made their mark on Armenian social and political life. Thus, it is not accidental that a number of researchers have referred to his activities, have covered different areas of A. Arpiaryan’s work, and G. Hovhannisyan’s work under discussion is a unique summary of A. Arpiaryan’s social and political activity.