THE ARMENIANS OF MUSA DAGH: FROM OBSCURITY TO GENOCIDE RESISTANCE AND FAME 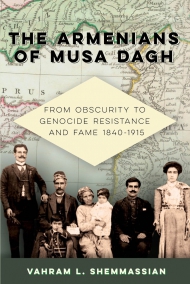 The Armenians of Musa Dagh: From Obscurity to Genocide Resistance and Fame 1840-1915 is a comprehensive history of the people of Musa Dagh, who rose to prominence with their resistance to the Genocide in 1915. Vahram L. Shemmassian has presented a thorough analysis of the social, economic, religious, educational, and political history of the six villages which constituted Armenian Musa Dagh. His work focuses on the important period of the mid-nineteenth to the early twentieth century, offering the reader a previously unavailable insight into the people whose courage and persistence ultimately led to their successful self-defense. Shemmassian, whose roots go back to Musa Dagh, for the first time in English provides a clear view of the complex multi-faceted history of the region. The book demonstrates that this was a period of great change, during which the Musa Dagh Armenians transitioned from an isolated and largely unknown people to a collectivity that prepared to defend its national identity and rights against an increasingly discriminatory and oppressive Ottoman Empire. Shemmassian’s work reveals much information which has been uncovered for the first time, based on primary sources. This fascinating story is a must read.

The book has been published as Volume 11 in the Armenian Series of The Press at California State University, Fresno and is supplied with maps, tables, illustrations and photos. General Editor of the Armenian Series: Barlow Der Mugrdechian.