ARMENIANS AND KURDS IN THE LATE OTTOMAN EMPIRE 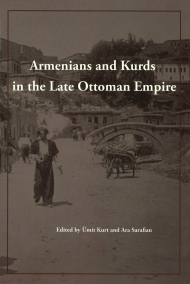 Armenians and Kurds in the Late Ottoman Empire is represented by five original articles, which were first submitted at a conference entitled “Armenians, Greeks, and Kurds: A People’s History of the Ottoman Empire” organized by Prof. Barlow Der Mugrdechian of the Armenian Studies Program and by Dr. Ümit Kurt. The conference was held at Fresno State on September 22-23, 2017 and was supported by a grant from the Thomas A. Kooyumjian Family Foundation. The book, edited by Ara Sarafian and Dr. Ümit Kurt, is a seminal work in the field of Ottoman history. The volume explores the relationship between Turks, Armenians, and Kurds, and brings a new understanding to the dynamics that shaped these interactions. The first three articles focus on the Hamidian massacres of 1895-1896. They track societal changes to better explain the Hamidian massacres in Cilicia, Aintab, and the bishoprics of Aghtamar.