THE AGONY OF A NATION (THE DEPORTED ARMENIANS IN MESOPOTAMIA) 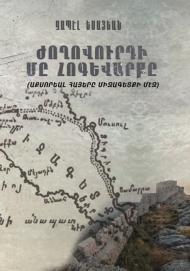 Zabel Mkrtich Yesayan (Hovhannisyan) was a prominent Armenian writeress, translator, publicist and national-public figure born in 1878 in Constantinople (died in 1943).

“The Agony of a Nation (The Deported Armenians in Meso¬potamia)” presents a history which Z. Yesayan heard and recorded following the words of Hayk Toroyan – an eyewitness of the tragedy of Armenians deported from Tigranakert, Zeitun, Achna, Aintap, Marash, Adana, Mersin, Sis, Edessa and other pros¬perous territories to the deserts of Mesopotamia starting from the end of 1914 up to February of 1916. The records are of historical-documentary value which highlight the evidence and descriptions of the Armenian Genocide.

The material of “The Agony of a Nation (The Deported Armenians in Meso¬potamia)” by Z. Yesayan is one of the brightest examples of the “literature of evidence” prevailing in the world literature and the last half a century.