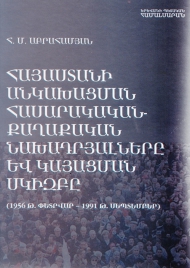 The work is devoted to one of the most important events of the history of the Armenian people, at the end of the 20th century, when the struggle for the independence of Armenia began. The work covers such topics as the rich social and political life of the period, the nationwide reaction of the Artsakh and Gorbachev’s perestyoyka.
The monograph analyzes and evaluates the literature related to the topic under discussion, indicates the significance of the scientific works of Armenian historians, political scientists, politicians, economists and literary critics. Not only is a positive assessment given of these studies, but also their shortcomings and omissions are mentioned in the book.