ETHNOPOLITICAL SHIFTS IN THE NEAR EAST AND THE ARMENIAN HIGHLAND IN THE VII-VI CENTURIES B.C. 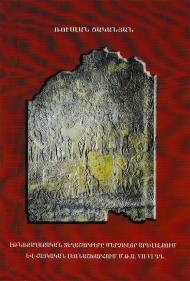 The monograph of R.Tsakanyan deals with the fundamental ethnopolitical and geopolitical changes in the Near East and the Armenian Highland in the VII-VI centuries BC and transformations of the ethnopolitical map of the whole region. The study consists of four chapters.
In Chapter 1 is represented the policy of mass deportations and resettlements in Assyria and Biainili-Urartu, Chapter 2 describes the ethnpolitical situation in the Near East in the VIII-VII centuries BC, Chapter 3 discusses the political situation in the Near East during the domination of Assyria, and Chapter 4 is devoted to the changes of the ethnopolitical map of the Near East in the late VII c. and the first half of the VI c. BC.
The monograph has been carried out on wide source materials – cuneiform texts (Assyrian, Babylonian and Urartian) and studies of classical authors.