THE ARMENIAN GENOCIDE. PRELUDE AND AFTERMATH. AS REPORTED IN THE U.S. PRESS. THE NEW YORK TIMES 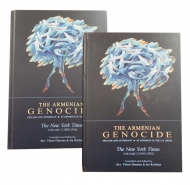 These volumes draw upon extensive American newspaper accounts about the fate of Armenians from 1890 to 1922 in the Ottoman Empire/Turkey. They, along with companion volumes, documents the Armenian experience of inequality, persecution, precursor massacres and the Armenian Genocide. The collection is part of a series of volumes that bring together thousands of pages of daily newspaper accounts that are invaluable reference work in revealing the fate of the Armenian people.
These are part of a comprehensive publishing project led by Rev. Vahan Ohanian (Mekhitarist Congregation) and Ara Ketibian. The series involves a planned ten books that systematically document the accounts from six leading American newspapers: The New York Times, The Boston Daily Globe, The Chicago Tribune, The Christian Science Monitor, The Los Angeles Times and The Washington Post. Such cumulative daily newspaper reports provide a documentary base from which to confront contemporary state-sponsored genocide denial that seeks to cast doubt about what happened in history. The witness accounts are a time capsule, but a powerfully moving one, even today.