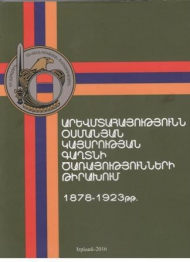 A book review by Ruben Sahakyan

In the memoirs, studies, archival and other documents dealing with the struggle of Armenian national-liberatory movement against the Ottoman tyranny are referred to considerable number of examples regarding the activities of the Turkish intelligence, which were aimed to jeopardize the undertakings of Armenian organizations. The study of Hakob Hatikyan discusses this problem from the time span between the beginning of the Armenian Question unti the creation of the Turkish republic. H. Hatikyan stresses that the modern «Turkish National Intelligence Service» (“Milli Istihbarat Teşkilatı”) is a direct heir of the two Ottoman special services - “Yıldız Istihbarat Teşkilat-ı Mahsusa” and “Teşkilat-ı Mahsusa”. It is also well known that the World War I became a fine opportunity for the Young Turk Ottoman government to fulfill its program of the Armenian genocide. In this undertaking an important role was played by the “Special organization” whose first victims were Russian Armenians living in the districts of Kars and Batumi (November-December 1914). The Ottoman intelligence which had established contacts with Russian Bolsheviks, in 1918-1922 constantly receives information from them and even supplies the Muslim bands acting against the Republic of Armenia with arms. After World War I ARF had succeeded to secretly organize the operation “Nemesis”. Turkish intelligence was unaware of it and could not warn the leaders of the Young Turks who had escaped to Europe and other countries.
H. Hatikyan discusses the activities of the Armenian intelligence and counterintelligence of the First Republic and also the Armenian-Kurdish cooperation against the Kemalist Turkey.