THE ARMENIAN COMMUNITY IN IRAQ IN THE 20TH CENTURY, YEREVAN, 2016

By: Ohanyan S.T., PhD in History 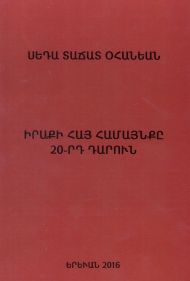 Although the roots of the Armenian reorganized community in Iraq may be traced back to the beginning of the 17th century which was as a result of the forced relocation by Shah Abbas of the Armenians to Iran, some of whom later on moved to Mesopotamia, however, the number of the Armenians here increased by the arrival of approximately 20-25000 survivors of the Armenian Genocide who had fled from the Western Armenian provinces.
The one hundred-year story of the deported Armenians, mostly from the historical Vaspurakan district and other parts of Western Armenia and Cilicia. Because of the present political, economical and insecure situation in Iraq, Armenians as well as other Christians are compelled to emigrate again, but now from a country, which at the beginning of the 20lh century hosted and sheltered them, giving the opportunity of a new and productive life, which they fully accomplished to the benefit of the Armenian people as well as to the Iraqi hospitable state and people.