OUR VICTORIES (The Forth Volume) 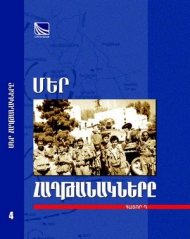 The volume (the authors Suren Martikyan, Vahan Mkrtchyan, Ruben Sahakjan, Tigran Devrikyan, Artsrun Hovhannisyan; military editor Vahan Karapetyan) includes the period of the th-20th centuries. It begins with the descriptions of the victories of the Armenian military forces during the liberation struggles of Artsakh and Syunik in 1720s and ends with the glorious and convincing victories of the Artsakh Liberation War (the end of the 20th c.). Special attention is paid to the guerilla movement, as well as to the participation of Armenians in the wars against the Persian and Ottoman Empires and in the two World Wars in the 20th century.
The last chapter of the book presents episodes of the Artsakh Liberation War. Both the volunteer squads (commanders - Leonid Azgaldyan, Tatul Krpeyan, Ashot Ghulyan and many others) and the regular armed forces of the Third Republic of Armenia and the Republic of Artsakh (the Republic of Mountainous Karabakh) under the command of Generals Dalibaltayan, Ter-Grigoryan, Ivanyan, Ter-Tedevosyan and many others showed brilliant results in that war.