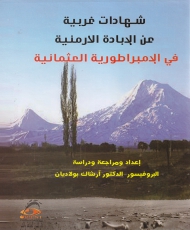 "Eyewitnesses to the Armenian Genocide Under the Ottoman Empire", a book by the Armenian Ambassador to Syria Arshak Poladian, was signed on Tuesday within a ceremony held by the Damascus-based Commission for Commemorating the 100th anniversary of the Armenian Genocide in cooperation with the Culture Ministry at al-Assad Library. Many politicians, men of religion, intellectuals, journalists and interested people attended the book signing ceremony.
The book, published by "al-Sharq House for Publication and Printing", includes important selections from memoirs of three eyewitnesses to the genocide; Syrian lawyer Faez al-Ghusein, Na'eem Bek al-Turki and clergyman father Ishaq Armala al-Siriani. It presents documents and photos uncovering the atrocities committed by the Turkish leaders against the Armenian people under the Ottoman Empire early in the 20th century and which claimed the lives of a million and a half innocent Armenians.