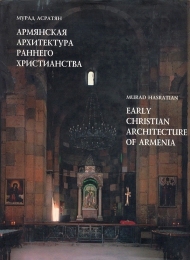 The period from the 4th to the 7th centuries was the most remarkable time in the history of Armenian architecture. It was marked by Armenia’s adoption of Christianity in 301 as a state religion. Speaking about any national architectural school in the Middle Ages, its typological identity should be regarded as the basic criterion: even a single new type of religious building was a great creative success for a given country’s architects, particularly in early Christian Armenia, whose architects produced several new original compositions of monumental structures, making a valuable contribution to the treasure-trove of world architecture.