By: Danielyan Eduard, Institute of History of NAS RA 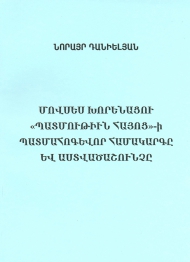 After the proclamation of Christianity as the state religion (301 AD) in Armenia the Bible was preached in churches orally. Since the invention of the Armenian alphabet (405 AD) by Mesrop Mashtots the Bible being translated in written form appeared to be at the centre of the attention of the Armenian historians and especially Movses Khorenatsi (the 5th century AD) in historical spiritual questions.
Movses Khorenatsi in his work “The History of Armenia” widely used citations from the Bible (Old and New Testaments) as was accepted in the early Middle Ages. At the same time he mentions “old histories” which he used for his work to give a full picture of ancient history of the nations which had not been mentioned in the Bible. The ideological basis of Movses Khorenatsi’s “The History of Armenia” constitutes the concept of the freedom of the Fatherland and Faith as a fundamental precondition of its national existence. Movses Khorenatsi exposed the pivot of the development of the history of Armenia, from ancient to early medieval times, determined by millennia-old national values.