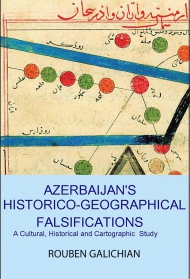 A Cultural, Historical and Cartographic Study

Most of the territory of today’s artificially formed Republic of Azerbaijan until the 10th to 12th centuries in Graeco-Roman and Armenian sources was named Aluank/Albania (on the left bank of the Kura River), in Arabic - Arran or Aran. This has no relationship to the European country of Albania. In this work whenever the name Albania is mentioned, it refers to Caucasian Albania. In the mid 1918 the name “Azerbaijan” was given to an artificially formed “state” on the left bank of the Kura and in cis-Caspian region, in the eastern Transcaucasus, taking the name from the Iranian province of Azerbaijan (ancient Atropatene, according to Graeco-Roman sources-Atrpatakan in Armenian), in the north-west of Iran, to the south-east of Lake Urmia. This anomaly has given rise to a double meaning for the same name. In this book the name of the artificially formed state is referred to as the “Republic of Azerbaijan”, or in some cases simply “Azerbaijan”, while the Iranian province is called Iranian Azerbaijan. The territory of the present-day Republic of Azerbaijan includes the lands of historical Albania, which lay in the triangle formed by the course of the River Kura (the left bank), the western shores of the Caspian Sea and the mountains of the Great Caucasus Range. Here, in ancient times according to Strabo, lived 26 Albanian tribes. The western and southern neighbours of the Caucasian Albania at the time were the four provinces of Siunik, Utik, Artsakh and Paytakaran of Great Armenia on the right bank of the Kura.
In addition to detailing the officially-sponsored invention of modern Azerbaijani national identity, this book also looks at the various methodologies employed by Azerbaijani historians and geographers for their falsification of the documented pasts of Armenia and Iranian Azerbaijan.