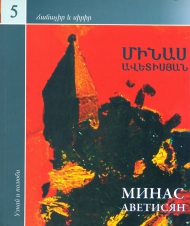 Minas Avetisyan well known for the originality of his artistic language was always in friendly relationship with Martiros Sarian, the great painter of the 20th century whose sparkling colors reflect the idea of eternity. In the 1960s Minas became the symbol of the Armenian modern painting rebirth.
The sonorous universe of Minas' colors is penetrated by either the cheerfulness of his mountainous native land or emotions full of sadness, dramatic, even tragic of his life period. Minas painted about five hundred paintings and graphical works, decorated twelve opera performances and created great sized wall paintings of a total surface of five hundred square meters, which was considered to be something new in Armenian art. One of these splendid works, which escaped damages during the earthquake of 1988, was taken off from the wall and transferred to the hall of the Yerevan airport.
Seeing the works blossoming like spring by Minas in the Museum of Modern Art in Yerevan, French painter Jean Lurçat said: ...This master of the brush may compete with the best French painters''.