By: Marukyan A. Ts., PhD in History 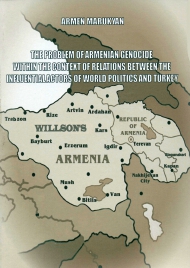 The monograph deals with the current state of the influential and leading countries' relations, namely those of Russia, the United States and the European Union with Turkey. The problem of Armenian Genocide is discussed within the context of present contradictions and interests in Russia-Turkey, the USA-Turkey and the EU-Turkey relations.
Several proposals and recommendations have been made both to the Foreign Ministry of Armenia and to the Armenian Lobby in Diaspora concerning the possibilities of making use of contradictions between the mentioned powers of the world politics and Turkey with the view of establishing an appropriate tendency in Moscow, Washington and Brussel to overcome the consequences of the Armenian Genocide.
The book is intented for those who are interested in the history of the Armenian Genocide and, in panicular, on the issues of claims, as well as for students and wide circle of readers.