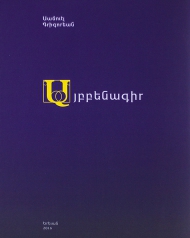 Armenian written culture comes from the depth of thousands of years and has undergone evolutionary cycles of written culture: petroglyphs, hieroglyphics, a syllabic script and alphabet. The Alphabet is the last cycle of the Armenian writing. The present collection consists of the works of Armenian literature from the 7th to the 20th century, having certain structural peculiarities. These works, in their structure, make the Armenian alphabet of Mashtots. On that basis, we called them ''aybbenain'': “ayb” + “ben” (the names of the first and the second letters of the Armenian alphabet), that is alphabetical For such works, that make up the Latin alphabet and have similar structure, the term abecedarium is used.
This collection, due to its thematic characterization and within the set purpose, is the first experience of collection, description, classification and analysis of Armenian literature alphabetic products. Of particular importance is the target investigation of works, belonging to this special literary kind, with regard of the structural features of the Armenian Mashtots alphabet.