ARARAT, THE SACRAL ТERRITORY: IN THE NOTES BY EUROPEAN TRAVELLERS 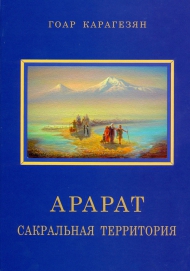 Ararat, the Sacral Тerritory: in the notes by European travellers . – Yerevan, “Gitutyun” Publishing House of the National Academy of Sciences of the Republic of Armenia, 2015 – 262 p.  (in Russian).

The monograph is a historical-literary study of the formation and development of the myths about Mount Ararat and adjoining territories, based on the Book of Genesis, the material of travel notes by European travellers of the Middle Ages and later periods, involving texts from travel literature by Oriental and Russian authors. The book consists of five chapters:
1. Formation of the tradition. The myth of the Flood and Ararat.
2. The road to the East. The image of the sacred mountain.
3. Ararat as an Impregnable Mountain.
4. Ararat - World Mountain - Centre of the Universe – Mother of the World.
5. Ararat, the Sacral Area (The first city in the world Noah built at the foot of Ararat; Etchmiadzin – Three churches – The Descent of the Only Begotten Son; Martyrs of Mount Ararat); the concluding chapter.