THE ANCIENT DRAMA IN ARMENIA 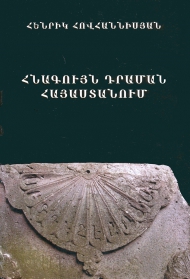 THE ANCIENT DRAMA IN ARMENIA
On the Origin of Drama

The book covers the issue of ancient Armenian mystery play. The research is based on medieval sources, linguistic data and pieces of folklore. There appear to be two types of evidence to suggest the occurrence of drama and theatre in Armenian History. The ancient Armenian mystery play displays thematic associations with “the myth of perpetual recurrence” symbolizing the universal cycle, and an interrelation with the Prometheus theme. The thematic mode is common for all cultures, but the ritual itself, representing the act of mystery (“the joint of time”) relates to early medieval literary sources of Armenian origin and appears to be closely tied to ancient Armenian beliefs. The captured power appears to be a restrained energy, a sort of anticipated release, a Messiah in the final chapter of “Sasna Crer”, the Armenian heroic epic.