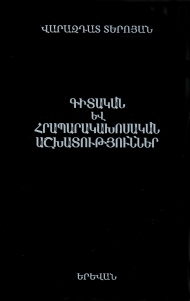 Varazdat M.Teroyan (Deroyan, born in the city of Van, Western Armenia 1887- died in 1938 in GULAG) - an intellectual, scholar and public figure of great merit came into the field of science and public work since the beginning of the 20th century and devoted himself to a number of various problems during his short creative life.
V. Teroyan left numerous valuable studies on the difficult problems of philosophy and literature thus contributing to the development of various aspects of Armenology. He translated major works of classical philosophers from the original. He was also occupied with scientific-organizational work.