THE PERIODICAL “ARMENIA” AT THE SOURCES OF LIBERATION IDEOLOGY 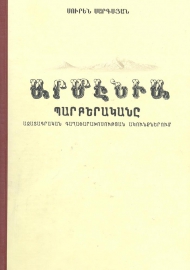 The Armenian national liberation struggle experienced an unprecedented rise at the end of the 19th century due to the national, economic, political, international, cultural, ideological impulses that generated a demand for changes. A great number of facts resulted in the rise of the national liberation struggle and undoubtedly prove that it was a direct consequence of the Turkish government’s inhumane policy.

The firstborn of the Armenian political press, the newspaper “Armenia”, spread the ideology of the Armenakan Party - the first and the only party established in Western Armenia which became its speaker. “Armenia” provided a great service. The newspaper openly reflected the way of thinking of the social and political circles of the mentioned time, their desire to see the freedom of the Motherland, their efforts in searching for the strategic means and finding answers to them.