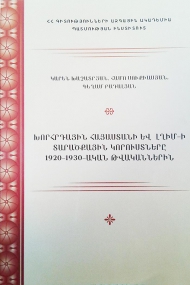 In the book, on the basis of the many-sided research of archival documents and materials, scientific and historical literature are presented the territorial losses of both Soviet Armenia and Nagorno-Karabakh Autonomous Region. As a result of the territorial losses in the 1920-1930s NKAR, Soviet Armenia and later its legal successor the Third Republic of Armenia appeared from the strategic perspective in unfavorable conditions. Due to the heroic victory of the Armenians in the Artsakh Liberation War has been liberated a considerable part of the Armenian territories annexed to Azerbaijan during the Soviet period. They constitute inseparable part of the NKR - the Artsakh Republic.