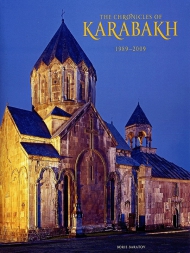 “The Chronicles of Karabakh” (ARTSAKH) is an illustrated book of huge cognitive, cultural and political significance. The deep love of the author (a writer, screenwriter and film director Boris Baratov) for his Homeland permeates the book, which is full of historical and contemporary facts, presented in chronological order and illustrated with documentary evidence. “The Chronicles of Karabakh” covers a twenty-year period, but it is illuminated by the millennia of the heroic history of the Armenian people, which forms the very roots of Artsakh.

In its ideological integrity this book draws the reader towards its key concept: the Motherland Armenia. The book consists of five chapters: “The Road of Life”, “The Angel”, “Death in Karabakh”, “Paradise Laid Waste” and “Twenty Years After” and contains more than 1,000 original photographs of historical monuments, natural surroundings and human fates.