ON GENERAL CHARACTERISTICS OF THE WRITING CULTURE OF PRE-MASHTOTSIAN ARMENIA

By: Movsisyan A. E., Doctor of Sciences (History) 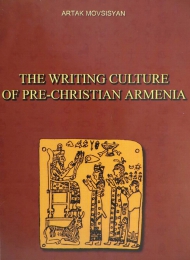 The development of written culture is a process lasting centuries and millennia. The Armenian Golden Age literature (the 5th c. which commenced with the Mashtotsian scripts’ invention) is a product of writing thinking which reached its high level. Written culture had long history in pre-Mashtotsian Armenia. Until the present hieroglyphs continue to be used in Armenia as forms of magic script, as marks of arti¬san masters in the form of a single ideogram. They appear on the walls of Christian temples, on coins of Cilician Armenia and as separate signaries attested in Armenian medieval manuscripts, being used also in applied art, etc.

The first results of the decipherment of the hieroglyphic system of the kingdom of Van are in favour of the latter’s Armenian origin. Moreover, along with voluminous Armenian lexicon in the language of the cunei¬forms of the kingdom of Van, recently it became possible to read separate sentences. Therefore, within the circle of our knowledge, we can ascertain that Armenian was a written lan¬guage, at least fourteen centuries before the great invention of St. Mesrop Mashtots.