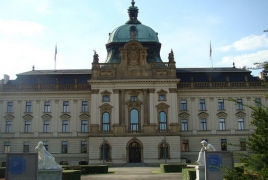 The Chamber of Deputies of the Parliament of the Czech Republic—the lower house of the Czech Parliament—unanimously approved a resolution on Tuesday, April 25, 2017 condemning the Armenian Genocide and genocides of other religious and national minorities in the Ottoman Empire during WWI.

The resolution was introduced by lawmaker Robin Bönisch who is a member of the Social Democrat Party (CSSD) and the Head of the Czech-Armenian Friendship Group. “I think it was the Czech Republic’s debt to formally recognize the Genocide. And because yesterday it was the 102nd anniversary of the Armenian Genocide, I think it was very symbolic to recognize the Genocide of the Armenians today,” Bönisch said.
The resolution, which passed unanimously (104/0) partly states:

“The Chamber of Deputies of the Parliament of the Czech Republic condemns the crimes against humanity committed against the Jews, Roma and Slavs in the territories conquered by the Nazis during the Second World War; condemns the Armenian Genocide and genocides of other ethnic and religious minorities which took place within the boundaries of the Ottoman Empire during the First World War, as well as genocidal acts committed in other parts of the globe, and calls on the international community to effectively halt human and civilian rights violations in the world as well as resolve disputes through peaceful means…”
Two years earlier, on April 14, 2015, the Committee on Foreign Affairs of the Chamber of Deputies of the Czech Parliament unanimously passed a resolution on the occasion of the Armenian Genocide centennial.

Thus, by the 25th of April 2017, 29 states had officially recognized the Armenian Genocide. It was recognized also by many international organizations and provincial governments;