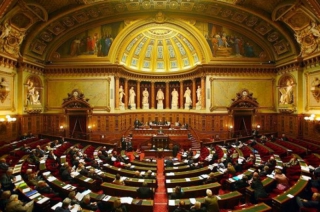 October 14, 2016
PARIS - The French Senate approved on Friday a new bill criminalizing the denial of the 1915 Armenian genocide in Ottoman Turkey and other crimes against humanity recognized by the French state.
The measure was backed by 156 lawmakers attending the debate in the parliament’s upper house. Some 146 senators voted against the bill.
The bill, proposed as an amendment to the law on “Equality and Citizenship”, was unanimously approved by the French lower house, the National Assembly, in the first reading in July. It stipulates that any public denial of those atrocities will be punishable by up to one year’s imprisonment and a 45,000-euro ($50,000) fine.
Currently, French law only makes it a crime to deny the Holocaust.
French lawmakers already passed a law against Armenian genocide denial about four years ago. The French Constitutional Court subsequently struck down that law, however, saying that it runs counter to freedom of speech.
Armenia was quick to hail the development. “We welcome the adoption by the Senate of the bill criminalizing the denial of the Armenian Genocide, which was approved by the National Assembly back in summer. With this step, France once again confirms its important role in the condemnation of past genocides and in the fight against their denial, as well as in the issue of preventing possible new crimes against humanity,” Foreign Minister Edward Nalbandian said in a statement.