29.01.2015. PAN-ARMENIAN DECLARATION ON THE CENTENNIAL OF THE ARMENIAN GENOCIDE 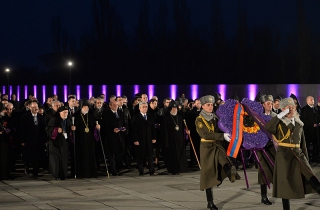 The State Commission on the Coordination of Events Dedicated to the Centennial of the Armenian Genocide, in consultation with its regional committees in the Diaspora,

-expressing the united will of the Armenian people,
-based on the Declaration of Independence of Armenia of 23 August 1990 and the Constitution of the Republic of Armenia,
-recalling the United Nations Universal Declaration of Human Rights of 10 December 1948, whereby recognition of the inherent dignity and of the equal and inalienable rights of all members of the human family is the foundation of freedom, justice and peace in the world,

-taking into consideration that while adopting the Convention on the Prevention and Punishment of the Crime of Genocide, the United Nations specifically underlined the importance of international cooperation in the struggle against that criminal offence,

-emphasizing the inadmissibility of impunity of the constituent elements of the crime of genocide and the non-applicability of statutory limitation thereto,

-condemning the genocidal acts against the Armenian people, planned and continuously perpetrated by the Ottoman Empire and various regimes of Turkey in 1894-1923, dispossession of the homeland, the massacres and ethnic cleansing aimed at the extermination of the Armenian population, the destruction of the Armenian heritage, as well as the denial of the Genocide, all attempts to avoid responsibility, to consign to oblivion the committed crimes and their consequences or to justify them, as a continuation of this crime and encouragement to commit new genocides,

- also considering the 1919-1921 verdicts of the courts-martial of the Ottoman Empire on that grave crime perpetrated “against the law and humanity’’ as a legal assessment of the fact,

- appreciating the joint declaration of the Allied Powers on May 24, 1915, for the first time in history defining the most heinous crime perpetrated against the Armenian people as a “crime against humanity and civilization” and emphasizing the necessity of holding Ottoman authorities responsible, as well as the role and significance of the Sevres Peace Treaty of 10 August 1920 and US President Woodrow Wilson’s Arbitral Award of 22 November 1920 in overcoming the consequences of the Armenian Genocide:

- Demonstrated an unbending will and national self-consciousness and restored its sovereign statehood, lost centuries ago,

- Preserved and developed national values, achieved the renaissance of their national culture, science and education, bringing its unique contribution to the development of world heritage,

- established a powerful and effective network of religious and secular institutions in the Armenian Diaspora, thus contributing to the preservation of their Armenian identity in Armenian communities worldwide, the shaping of a respected and esteemed image of the Armenian, and the protection of the legitimate rights of the Armenian people,

- united and restored the national gene pool that was facing extermination as a result of the Genocide, through a pan-Armenian cooperation and extensive repatriation program,

- made its valuable contribution to international peace and security during the First and the Second World Wars and won glorious victories in the heroic battle of Sardarapat and the Artsakh war.

- a stronger Homeland, free and democratic Republic of Armenia,

- the progress and strengthening of independent Artsakh,

- the efficient unity of Armenians worldwide, - the realization of the centuries-old sacrosanct goals of all Armenians.